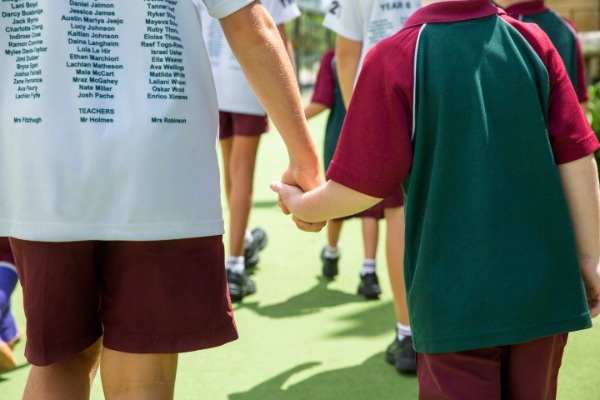 St James Primary networks with the local community and external agencies, such as St Vincent de Paul to value add to support the dignity of humanity and promote the common good within society.

Students (along with their siblings) belong to 1 of 4 house teams that promote connections to our Catholic story and a deeper sense of belonging.  Houses are used for sporting events, assemblies and gatherings.

St Mary of the Cross MacKillop is Australia’s First Saint. Mary Helen MacKillop was born in Melbourne in January 1842 and was the eldest of eight children. She was a serious child with a strong love of God and a desire to do what she could for people in need. With Fr Julian Woods, Mary MacKillop started Catholic education in Penola, South Australia and founded the Sisters of St Joseph in 1866. Mary MacKillop lived a life of service to God and to his people by ‘never seeing a need without doing something about it.’

Sydney’s first bishop, John Bede Polding, was born in Liverpool, England, on 18 October 1794. Polding arrived in Sydney on September 13, 1835. For the next 30 years, John Polding worked to create a truly Australian Catholic Church. He initially adopted a hands-on approach, and often said Mass daily in different locations, heard numerous confessions and attended to the needs of the sick and dying.  Archbishop John Bede Polding died in office on the 16th of March 1877 at Sacred Heart Presbytery, Darlinghurst.

Father Cornelius Hanly was first diocesan Parish Priest of Tweed Heads from 1918 until 1967. Fr Hanly was an uncomplicated down-to-earth person who worked hard in the service of the people of Tweed Heads. Fr Hanly had a great love of sport, particularly Rugby League.  He loved to surf and each morning Fr Hanly would surf at Greenmount after saying morning mass. He was a member of Greenmount surf club for many years. Fr Hanly passed away on 14th November 1979 in Lismore.

Mrs Elaine Ryland was the founding Principal of St James Primary from 1993 – 1997, having been an active member of the Tweed Heads parish and Principal of St Joseph’s Primary, Tweed Heads from 1987.  As the parish continued to grow, it was recognised that both schools, St James and St Joseph’s primary, needed to be Kinder to Year 6 schools in order to fulfil the goal of access to Catholic education in Tweed Heads. Mrs Ryland’s vision for St James was to provide ongoing holistic education for children from Kindergarten to Year 6 in a loving family atmosphere; ‘A Family in Christ.’