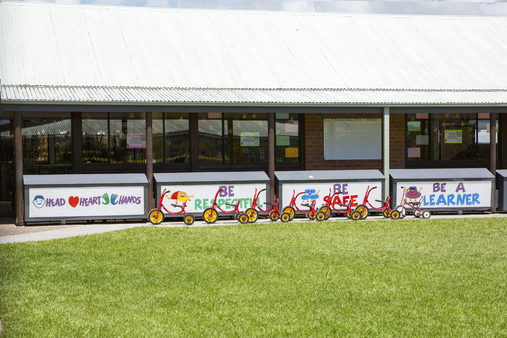 From 1917 until 1993, St Joseph’s Primary School was the only Catholic school in the Parish of Tweed Heads.  The school was founded by the Ursuline Sisters from Armidale who came to the Tweed in 1917, at the invitation of Bishop Carroll of Lismore. Under the leadership of Sister Mary Joseph Reynolds, founding principal for the Presentation Sisters at St Joseph’s Primary and Mother Angela Dalton, first Principal of St Joseph’s Primary School, Tweed Heads the Parish school provided education from Kindergarten to Year Nine until 1952 – when the Windham Scheme was introduced and the Secondary students were transferred to Mount St Patrick’s High School in Murwillumbah.

That same year (1952) the Ursuline Sisters returned to Armidale after handing over the school to the Presentation Sisters from Lismore. They continued the great apostolic work begun by the Ursulines, for the next thirty-four years. In 1987 the Presentation Sisters withdrew from the school also and the first lay Principal of St Joseph’s was appointed – Mrs Elaine Ryland. Since its foundation in 1917, St Joseph’s grew steadily and was gradually extended over the years to cater for increasing enrolments, until it became a fully two streamed primary school in 1987 –  with almost four hundred pupils.

As the population in the Tweed continued to increase, so did the demand for Catholic education.  Under the leadership of Fr James Griffin, Parish Priest of St Joseph’s, plans for a second Parish primary school and a secondary school were put into action.  Work on both buildings commenced at Banora Point in 1992.  The following year, the children in Years Five and Six from St Joseph’s, Tweed Heads, were transferred to the new school at Banora Point – now officially known as St James.

The dream of the parishioners of St Joseph’s Parish was finally realised in March 1994, with the solemn blessing and opening of Stage One of both schools (St James Primary and St Joseph’s College) by Bishop John Satterthwaite, Bishop of Lismore.

Year Four children from ‘in town’ joined Years Five and Six at St James Primary in 1994 – bringing the enrolment to 190 pupils. The Principal, Mrs Ryland relocated to St James that same year. At the completion of Stage Two in 1995, children from Kindergarten to Year Three joined the 'Family in Christ' of St James Primary at the commencement of the 1996 school year  – bringing the total enrolment to 320 pupils.  Over a relatively short period of three exciting and challenging years from its foundation, St James had now become a fully-fledged, thriving Catholic school community (K–6) with a vision and a commitment to live “Life to the full…as One Family in Christ”.

On Mrs Ryland’s retirement in 1997, Mr Terry Cahill joined the community of St James Primary as Principal in 1998 until 2004. From 2005 -2016 Mrs Vicki Whittaker led St James into a new era of learning for the 21st Century. In Term 3 2016, Mr Nicholas McTaggart became the Principal of St James Primary, where he continues the vision of the Founders  – building a community of faith and learning, characterised by Christian values, attitudes and practices, in a welcoming and caring educational environment.

Since its foundation, St James Primary has gained an enviable reputation in the wider community for participation and achievements in numerous academic, cultural, sporting and civic events.  As a faith-filled and growing community, committed to the pursuit of Gospel values and excellence in all we do.